Throughout the engineering trends of containerization, orchestration, and configuration data for both app developers and platform engineers, there's a newish movement for organizations - GitOps.

Although GitOps is great by itself, there are still a ton of parameters, variables, secrets, and other options that are needed when utilizing the methodology.

In this blog post, you'll learn about what GitOps is, how it works well with CloudTruth, and how to get started in any environment right now.

Kubernetes made a few things easier, including:

Essentially, you can now manage your infrastructure with an API. Instead of logging into a UI or using a CLI, you can go straight to the SDK. Whether you want to use YAML, which is the standard Kubernetes approach to deploying containerized apps, or even use an SDK. Any method that's available to interact with an API, you can use for Kubernetes.

The problem is that now there are a ton of configuration files to deploy. Using kubectl apply -f on the terminal doesn't seem like a huge deal when you have one or two Manifests, but what about ten? Or twenty? And each of those have to get deployed daily or weekly? It can begin to get cumbersome.

GitOps is configuration management with a Git-based repository as the source of truth.

Why CloudTruth and GitOps

When you're setting up a GitOps tool/controller, for example, Flux, there's a lot of configuration data that you have to pass in.

and a few other pieces of configuration data.

With all of the values that you have to pass in, you need a central location that you can use to store all of those values, update them easily when needed, and ensure that they're stored safely.

That solution is CloudTruth.

Getting Started With CloudTruth and GitOps

Now that you've learned about GitOps and why you'd want to use CloudTruth with GitOps, let's dive into a hands-on example.

First, you'll need to have some parameters to pass into the Flux configuration. The parameters include:

An example of how the parameter names and values should look is below. 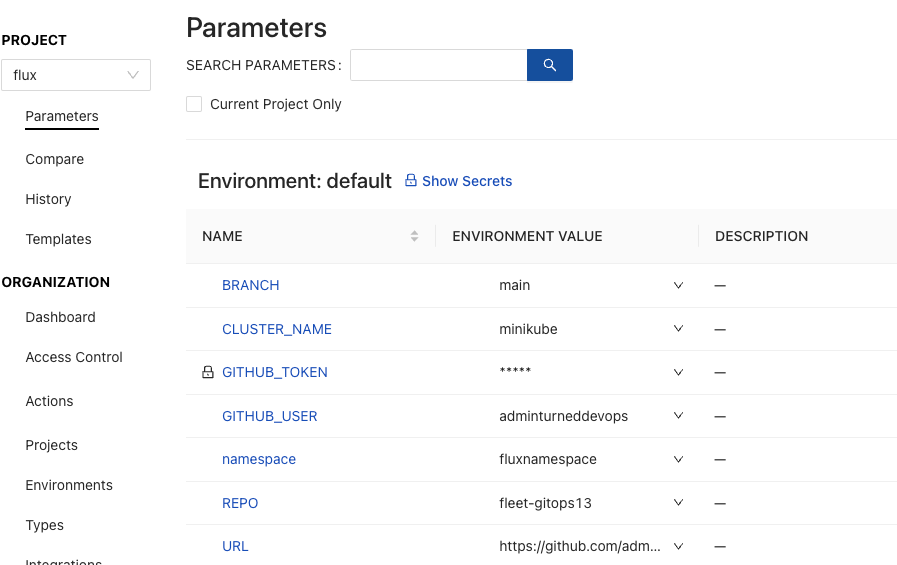 Next, you'll need to install the Flux CLI. There are a few different options, so you can take a look at the link here to download it.

Once the CloudTruth Project and Parameters are configured, along with the Flux CLI installation, it's time to start configuring Flux.

First, run the Flux precheck against your Kubernetes cluster to confirm the cluster has the proper prerequisites.

Create a new file and name it git.sh. Add in the following code to git.sh. The code below contains the bootstrap configuration, which connects Flux to GitHub.

You should see an output similar to the below.

Log into your GitHub account and you should see a new repo with whichever name you chose for the Flux repo when specifying the CloudTruth parameters. Clone the repository down to your localhost and change the directory (cd) into the repo on the terminal. All of the configurations moving forward must be done from the Flux repository.

Create a new file called flux.sh. Add in the following configuration, which creates a Bash script to create the Flux source. The source tells Flux what repository to look in for the Kubernetes Manifests that you want to deploy to a Kubernetes cluster.

In the directory that contains the Kubernetes cluster in the Flux repo, you should see a new file called nginxdeployment-source.yaml which contains output similar to the following:

The GitRepository resource in a resource that's created with the Flux CRD to perform the interval check-ins based on the source of where your Kubernetes Manifests exist.

The last step is to push the configuration to GitHub.

You can now set up your deployment to deploy your app with Flux.

Congrats! You have successfully used CloudTruth and GitOps together for easier, more efficient deployments.

How to deploy a simple Kubernetes app with a K8s operator

How to deploy a simple Kubernetes app with a K8s operator

There is a better way to Kustomize Kubernetes deployments for multiple environments by using a centralized parameter and secret store with templating. Read More