Many organizations struggle to manage the issues of the current state vs the desired state and configuration drift in the deployment phase of the software development lifecycle (SDLC). Whether it's a manual change on a server or the lack of tools to ensure that all environments are configured the same. In this post, you'll learn how CloudTruth ensures every environment is configured perfectly.

The two biggest gripes that DevOps and application engineers have is dealing with deployment and consistency issues. Whether they're deploying with CICD, in a GitOps workflow, or attempting to make sure that Staging and Production look the same, managing the desired state is always needed.

In this post, you'll learn about the current state of SDLC deployments and how CloudTruth helps.

Where The Industry Currently Sits

Almost every engineering team in every organization, ranging from 10 employees to 5,000, has tech debt. Tech debt isn't created maliciously. It's usually something along the lines of "Yeah, implement that for now so we can move on to this more pressing matter and we'll go back to fix that later." The problem is, "later" usually never comes until it's too late and kicking down everyone's door.

Tech debt usually involves configuration data not being where it should be and a massive amount of configuration sprawl. For example, nearly every Sysadmin or DevOps engineer at some point has on the fly logged into a server to fix an issue that was hurting production. Just like almost every software developer has gone in and manually fixed some code in production without going through the proper channels. Although high fives and praise are going on at the moment, after the issue is fixed, the DevOps engineers and software developers are pulled in to fix another fire, which means they didn't "fully" fix the actual problem that caused production to have issues.

This opens up two big problems:

In the time before automation and repeatable techniques like CICD, organizations, if they were lucky, could push out 3-4 application updates per year. The remainder of the year was spent figuring out how to push the updates and preparing the platform to be able to handle it. Now, with CICD, we have the ability to push a button or push code to a repository, and it automatically kicks off a pipeline that does the work for us. However, there's a problem - consistency isn't met.

Because it's so easy to push a button and the rest of the details are abstracted away from engineers, there are constant consistency issues with deployments. Whether it's a Docker image that wasn't built with the proper dependency for an environment or there weren't enough ReplicaSets in a Kubernetes Manifest to handle the load, it seems like engineers are constantly changing parameters and environment variables on the fly without having one location that they can go to so they can see not only what the current values are, but an easy way to change those values.

Simply put, engineers are spending more than 70% of their time putting out fires because environments aren't consistent and they have no way to manage the consistency. They're spending time fixing issues that could be easily fixed from the start, reducing the majority of tech debt and making engineers much happier in their day-to-day work.

Engineers should spend a MAX of 40% of their time putting out fires and the rest of their time implementing value-driven work for the business. Teams need a way to save themselves the 40%.

Thinking about one of the high-level examples from the previous section - an engineer logging into a server, whether it's SSH or RDP, and fixing some config file on the fly to make an application function properly. Although the issue is fixed, there's a big problem here.

The problem is that now, the desired state doesn't match the current state with new deployments. For example, let's say that a CICD pipeline is used for deployments. Perhaps it's running some Terraform code to create a pool of servers, and it creates two servers for an auto-scaling group. Then, a few weeks later, there's a production issue. Engineers log in to troubleshoot and it turns out that two servers aren't enough for the load coming in, so they log into a portal and autoscale to three servers.

Here's the thing - if that CICD pipeline runs again for another environment, it'll only create two servers if the code wasn't updated to ensure there were three servers instead of only two. That means that the desired state will not match the current state.

Instead, engineers need an easy way to set those values for each environment via parameters instead of having to worry about changing multiple configs just to get to the desired end result.

How CloudTruth Solves This Problem

With CloudTruth managing the config data, you never have to guess the correct parameter and secret values for each environment. You also don't have to worry about setting manual values throughout environments, like Dev, Staging, QA, and Prod. Instead, you have one location to manage the values and can also compare values across multiple environments and track the changes automatically.

Below is a screenshot of parameters. These parameters exist for a specific CloudTruth project.

Under each parameter, you can either have a default value that goes across all environments, or you can set specific values for each environment. In any case, the parameter key still stays the same, and the value changes. 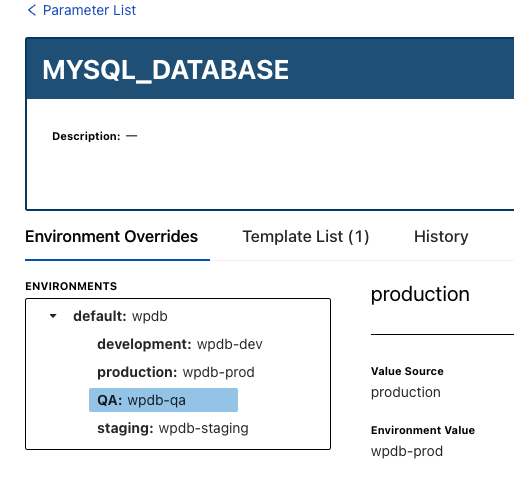 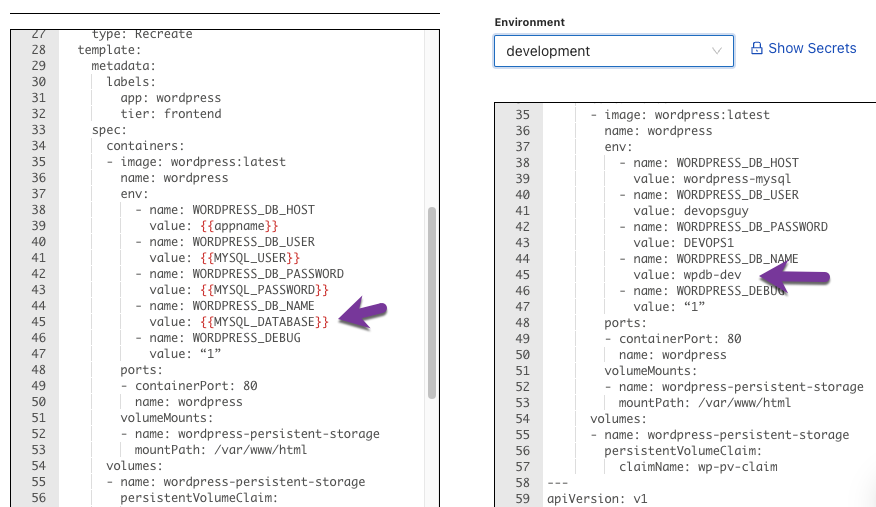 CloudTruth helped a customer increase deployment velocity by reducing the release cycle from two months to two weeks. This was an epic victory for both DevOps and App Devs teams. Deployment issues are typically caused by consistency issues, and utilizing a central configuration platform solves this problem.

This is how CloudTruth helps: keeping environments consistent.

Christian Tate, CEO of CloudTruth, says "know more, flow more", and that's what is being accomplished for customers.

Managing Terraform variables and state across environments can become burdensome and error prone as environments within an organization grow. This is a typical problem... Read More
AWS

Using Terragrunt to deploy a backend for remote state files enables you to write infrastructure code without the need to copy and paste the backend configuration into various... Read More
AWS

How to store and leverage Terraform remote state and AWS S3

In this article we are going to walk through configuring a Terraform remote state file with an AWS S3 backend that deploys an AWS instance. We will then use that remote state... Read More